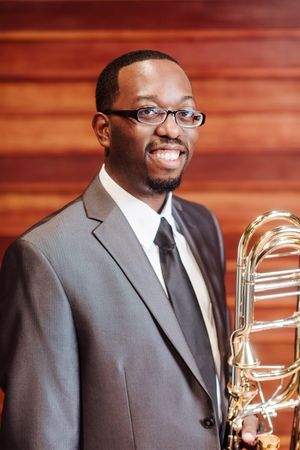 A third-generation musician, Martin McCain’s career spans an impressive range of musical genres. As an ambassador of the bass trombone, Martin maintains a versatile performance schedule as a soloist, recording artist, chamber, orchestral, jazz/commercial musician and educator. He is a four-time winner of the Global Music Awards and was featured as their “Emerging Artist” in Billboard magazine, with performances described as "solid and masterful," (International Trombone Association Journal) with a “warm and beautiful,” tone (Glissando Magazine).

McCain’s performances include concerts at Carnegie Hall, Hollywood Bowl, Croatian National Theatre and others. His performances have been broadcast on CNN’s Juneteenth: A Global Celebration of Freedom, Radio Television Hong Kong and NPR's "Performance Today”.

As a jazz/commercial musician, McCain is the leader of the award-winning Austin based jazz trombone ensemble, JazzBonez. He has performed with the Tommy Dorsey Orchestra, Frank Sinatra Jr. Orchestra and several Broadway touring ensembles including The Lion King, Wicked, and Motown. Martin has also collaborated with a number of legendary artists such as Earth Wind and Fire, Roberta Flack, Bel Biv Devoe, Jon Batiste, Chaka Khan, Ne-Yo, Robert Glasper, The Roots, Lenny Williams and the Four Tops.

In the 2022-23 season, Martin will be an artist-in-residence at Stetson University. Other upcoming engagements include performances in London, Toronto and touring with the McCain Duo. A passionate advocate of creating new trombone repertoire, McCain has commissioned and arranged works that are becoming standard in the canon. These works include his own arrangements of Weber/Rachmaninov, Jack Wilds’ Leviathan for trombone ensemble and Marcus Wilcher’s Shades (international solo competition repertoire).

Martin is an Artist/Teacher of Trombone and Coordinator of Brass at Texas State University. Dr. McCain’s students have also been extremely successful in solo and ensemble competitions including those hosted by the International Trombone Association, the American Trombone Workshop, and the Big 12 Trombone Conference and are regular winners of the Texas State University concerto competition. In recognition of his teaching, Martin received the College Achievement Award in Teaching and the Presidential Distinction Award for Excellence in Teaching. His students have been accepted into some of the nation's most prestigious graduate programs such as the Juilliard School, Eastman School of Music, Yale University, Northwestern University, Manhattan School of Music and the Cincinnati Conservatory of Music. In addition to his duties at Texas State, Martin has spent summers on the faculty of the Interharmony International Music Festival (Italy), the SliderAsia Music Festival (Hong Kong) and the English Brass Academy (Croatia).

McCain received his Bachelor of Music degree with a business minor at the University of Southern Mississippi, a Master of Music and Doctor of Musical Arts degree from the University of Texas at Austin. Martin McCain is a performing artist for S.E. Shires, Reunion Blues Gig Bags and plays on the "McCain" signature mouthpiece series manufactured by Pickett Brass. In his spare time, Martin is an avid BBQ pitmaster and sports enthusiast. 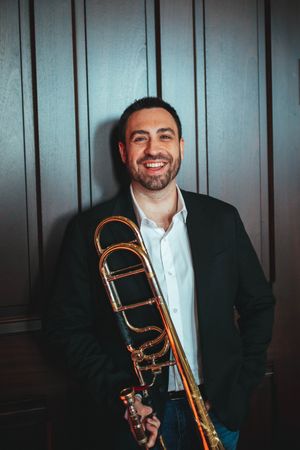 Jett Walker currently holds the position of Lecturer of Trombone at the Texas State University School of Music. He has achieved candidacy for the degree of Doctor of Musical Arts in Trombone Performance from the University of Cincinnati College-Conservatory of Music and will complete this degree in Spring 2023. During his time at CCM, Jett served as both Trombone Teaching Assistant and Brass Quintet Fellow and performed the duties of teaching applied lessons, directing the CCM Trombone Choir, performing with the Graduate Brass Quintet, and coaching various chamber ensembles. His scholarly research is focused on both establishing and improving best practices for student brass quintets and adapting various applied-lesson pedagogies to the trombone ensemble setting.

Outside of his academic life, Professor Walker enjoys a busy freelancing schedule. He has regularly performed with the Cincinnati Symphony, Cincinnati Pops, Battle Creek Symphony, Richmond Symphony, and Kentucky Symphony, and has also performed with the Cincinnati Opera, Dayton Philharmonic, Queen City Opera, Lexington Philharmonic, and Brazos Valley Symphony. A versatile musician and enthusiast of jazz and commercial music, he has also performed with the Cincy Brass, Blue Wisp Big Band, Joe Rogers Big Band, Seven Dutchmen Orchestra, Olmos Basin Brass Quintet, and numerous musical pit orchestras in San Antonio. His freelance work has allowed him to share the stage with such illustrious performers as Cynthia Erivo, Leslie Odom Jr., and most recently, The Who.

Professor Walker also gives frequent solo performances and is committed to regularly commissioning new works for solo trombone. He was named winner of both the CCM Brass Solo Competition (2021) and Texas State University Concerto Competition (2020), and recently performed as a featured soloist with the CCM Chamber Orchestra (2022). Professor Walker has also commissioned and premiered two works for solo trombone, Jett Stream Blue by David Wilborn, and Sonata for Trombone and Brass Quartet by Jack Wilds, in which Jett served as the consortium’s lead commissioner.

In addition to performing, Professor Walker has a passion for music education and is committed to serving current and future music educators. He recently served as the Brass Teaching Artist for the MYCincinnati youth orchestra, a program that provided children with access to free, high-quality, music education. He earned his doctoral cognate in music education, and during his master’s degree, Jett assisted with the teaching of brass techniques classes for undergraduate music majors. Prior to attending graduate school, Jett also served as a middle school band director for five years in central Texas. Bands under his direction were consistent recipients of the UIL “Sweepstakes” award among many others. He is also a proud contributing writer for the growing online journal The Collective: Shifting the Paradigm for Critical Musicians. 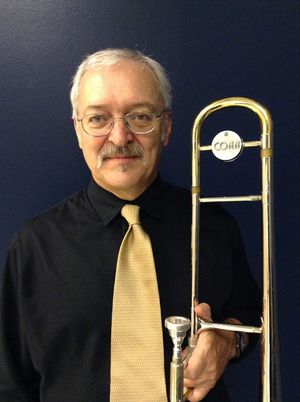 Randy Zimmerman joins the music faculty of Texas State University as the
Jazz and Latin Trombone Instructor. While earning a Bachelor of Music degree in jazz studies at North Texas State University (now University of North Texas), he toured the midwest with the Jimmy Dorsey Orchestra, and Portugal and the Soviet Union with the 1:00 Lab Band. Upon graduation, he embarked upon a performance career in New York City working with the Larry Elgart Orchestra, and the Tito Puente Orchestra, before moving to West Germany to tour with the Klaus Lenz Jazz-Rock Machine. In 1980, Mr. Zimmerman returned to his native Texas, where he has since been a free-lance trombonist in the Austin/San Antonio region. He has been a member of the Pinnacle Brass Quintet since 1991, a regular composer for the Creative Opportunity Orchestra for 20 years, and a member of the James Polk sextet, Centerpeace, since 2010.

In 2006, Mr. Zimmerman earned a Master of Music Degree in Trombone Performance - Jazz Emphasis from The University of Texas at Austin. He has over 40 years of experience teaching trombone in public schools in the Austin/San Antonio area and was the trombone instructor at Temple College from 2013-2022 andTexas A&M-Central Texas from 2019-2022.